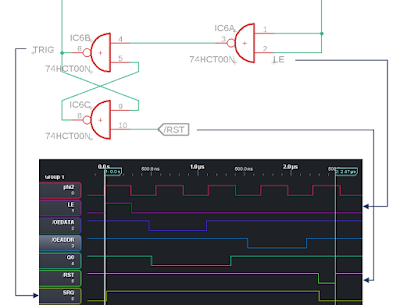 The architecture of my Atari cartridge port interface adapter to an ESP8266 is to use an Arduino Nano (ATmega328P MCU) as an intermediary. Another way is to use an FPGA, but that's more costly and I don't have enough experience to try that yet. Using an MCU on the cartridge port, which is really just the 6502 bus, calls for the use of 3-state latches to capture and to hold data in place while the two microprocessors go about their business. While there is a flashcart out there that uses a 32-bit STMicro MCU to respond with 6502-bus timing, I'm not confident I can do that with a 16-MHz 8-bit MCU.

I've run into several challenges. First, what DIO pins should I use? I ended up splitting the 8-bit bus into two 4-bit nybbles spread between ATmega328P Ports D and B. The Arduino doesn't have an entire 8-bit port free. Reading the port requires some fun bitmath. Second, the output enable is sent out over a pin on Port C right before the 8-bit data is read. The 16-MHz is so fast, I had to throw in a NOP instruction to properly read the data. The enable time of the SN74HCT573 (/OE->Q) is at least 40 ns. Assuming the ATmega changes its output pin state at the end of it's clock cycle and begins its read at the start of the next, there's not enough time for the latch to output its data. A single NOP on the ATmega is 62.5 ns, more than the enable time on the latch. Or, maybe the ATmega328P digital input has some setup time that's otherwise violated. Either way, some brief testing indicates no missing bits.

The third challenge is related to the second - the disable time on the latch is also at least 40 ns. I want to read the address latch and the data latch sequentially. To avoid bus contention, the second latch cannot be enabled until after the first latch is fully disabled. This problem was solved by moving some instructions around inside the interrupt routine to put some delay between the two read operations. 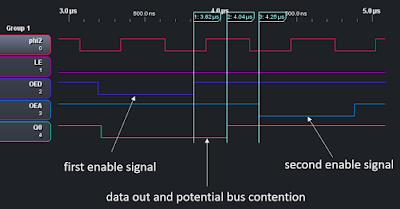 The disable time (OED rising edge to Q0 rising edge) is much longer than expected. But the Arduino C++ interrupt code arrangement makes the timing work out:

The interrupt routines reads two bytes and increments a counter, all in less than 5 microseconds. I put the counter increment in between the two reads to give the first latch time to disable before the second latch is enabled, which avoids bus contention. Cool.
Posted by jeffPiep at 10:00 PM 3 comments:

Worked on a schematic this weekend ahead of adding more components to the circuit. I decided to include a buffer to grab the 8-bit address when the Atari executes a STA $D5xx instruction. I figure I can use the 8-bits to add some features or make the protocol simpler.

I use the free "maker" version of Autodesk Eagle. Here are the Eagle libraries used in the design:


I am grateful to the generosity of the individuals and organizations who make the tools and information freely available for hobbyist and maker use. That makes fun hardware projects like this possible.

Posted by jeffPiep at 3:00 PM No comments:

Most of the time spent on a hardware project is solving problems. I ran into an interesting one on my Arduino Nano: sending a digital out high on one pin was causing the hardware interrupt on another pin to trigger. What? Turns out my test setup was causing the problem. A bad case of the observer effect.

The Nano is biased at 5 V, which makes it easy to interface to the Atari. However, my FPGA-based logic analyzer is only 3.3 V compliant, so I need a level translator in between. I'm using a small 4-bit translator based on a single-FET design. These are often used with I2C interfaces.

I was stumped by the false interrupts and couldn't find anything like it online. It drove me to read the Atmega 328 data sheet. At least I have a better understanding of the microcontroller and its interrupts. I finally went back to something I knew worked: turn the on-board LED on and off using an external interrupt. I then started changing the output pin #, which worked until it landed on the one I was monitoring with the logic analyzer. Ack! Grasping at straws, I tried adding pull up and pull down resistors to no avail. Then I realized the false interrupts only occurred when the output changed from low to high.

Maybe translator was sinking or sourcing too much current on the Nano's push-pull output drive? The typical diagram I see with these translators show effectively open drain outputs, so maybe I'm not using it in its intended application. It also turns out these things pull current when the signal is low. I think that suddenly applying a high causes the translator to load down the output with too much current, causing a malfunction on the IO bus.

I fixed it by putting a 330-ohm resistor in series between the output and the translator.

Although this is a rebuild of my early breadboard using a new microcontroller, I want to go step-by-step to make sure each part works. The first circuit is a decoder to read the bus signals and generate a latch enable (LE) and an output enable (OE') for the interface buffers I will use between the Atari and the Arduino. Here's the logic diagram: 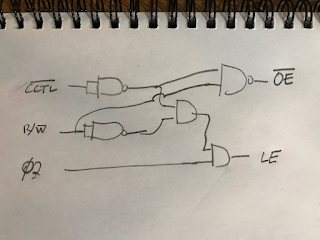 The cartridge port has a convenient Cartridge Control (CCTL') line that was intended to be used for bank switching. CCTL' goes low with an address of $D5xx. I want to be able to latch the data bus into a buffer with 6502 executes a STA $D500. This video has a nice explanation of 6502 bus timing and this page has a write enable circuit at the bottom, both of which gave me enough background to end up with this design.

I built this up using TI HCT logic, which you can still get in DIP packages. It uses one NAND (SN74HCT00) and one AND (SN74HCT08) chip. 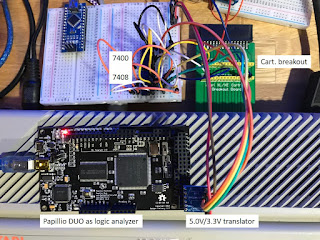 I connect to the cartridge port using a breakout board and monitor the signals with a FPGA board running logic analyzer firmware. To cause LE to go high, the 6502 needs to execute STA $D500. I just used a POKE command in BASIC to do this easily: 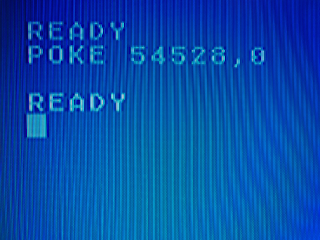 Note how the clock signal PHI2 gates the LE when the CCTL and R/W are both high. The resulting signal will be used to latch the data bus into a buffer and to interrupt the Arduino.

Thanks for reading.
Posted by jeffPiep at 5:46 PM No comments:

The advent of Arduino was great for hobby activities and getting back into tinkering with programming. An Atari computer fan(atic?) Thomas C. decided to resurrect the Atari's ability to connect to the PLATO system as a terminal and started up a vintage computing community dedicated PLATO system. You can get on the original PLATO system here. I found all this intriguing because I had been seeking to play the PLATO tank warfare game that is listed in Ernst Cline's Armada (Chronology). Who knew? Recently, Thomas C. asked if someone could interface a wifi modem to Atari's cartridge port. Why not take a crack at it?

I learned to program my Atari 400 then 800XL in BASIC during middle school. About that time, I became interested in how the machine worked and read about the ANTIC chip. I made my own character set, although I cannot remember how I learned to do that. I tried doing some player missile graphics (sprites), but never grasped it enough to use it. So I didn't understand enough to put it into practice.

I was also reading about robotics and wanted to control things. At this time, I told my father I wanted to learn how to "program hardware." He figured out what I meant was I wanted to design digital circuits. He was a mainframe system analyst and didn't know enough electronics to teach me (or maybe I had other more important interests) so it wasn't until college that I learned to design electronics. I also learned assembly programming on a Motorola 68HC11 microcontroller. Although I ended up going into microwave systems, I still dabble in embedded systems whenever I can.

For better or worse, I'm entering into the Retro Challenge 2019/03. Looking back at emails, I started this sometime in September 2018. In January 2019, I finally had a working prototype that seems to work without anomalies (no dropped characters, missed packets, etc.). I took a break in February to enter the BASIC 10 Liners. I don't know why I made the decision to not post earlier as I was developing, other than life gets in the way. 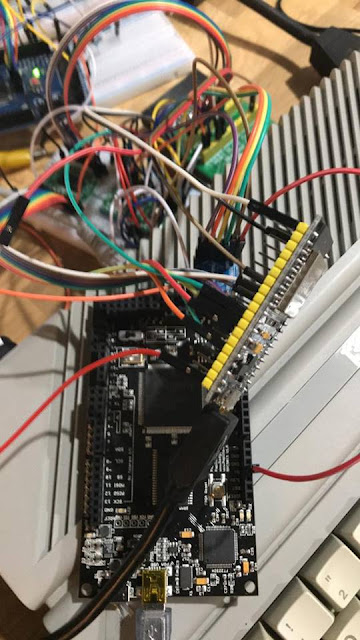 Posted by jeffPiep at 8:00 AM No comments: